A true hero and source of constant inspiration for generations of Greek musicians, Yiannis Spathas was one of the leading electric guitarists in Greece emerging in the late 1960s. Founding member of the legendary Socrates Drank the Conium, he was the driving force behind the band’s electrifying sound and a guitar virtuoso who managed to create a unique and original blend stemming from rock, blues, and traditional Greek music.

Born in 1950 in Paxos in the Ionian Islands, Spathas grew up in Piraeus, where he formed the band Persons (1966-1969) with Antonis Tourkogiorgis and Ilias Asvestopoulos. Together with Tourkogiorgis, they would soon after create Socrates, one of the the most emblematic Greek rock bands of the 1970s and early 1980s. 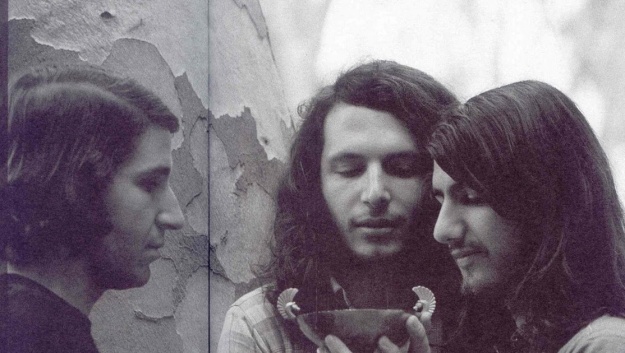 As the lead guitarist of Socrates, Spathas developed an exceptional guitar technique and created a highly idiosyncratic style that brought together influences from artists like Jimi Hendrix, Ten Years After, John Mayall as well as traditional Greek music, which proved a deep and enduring influence on Spathas, both as performer and composer (according to Spathas, two of his greatest influences were Jimi Hendrix and Greek clarinet player Tassos Chalkias).

Spathas’s guitar playing in Mountains (from the celebrated album Phos, on which the band collaborated with Vangelis Papathanassiou) continues to serve as a testament to his masterful technique and profound musicality.

Following the break-up of Socrates, Spathas pursued a long and successful career as composer, arranger and session guitarist, collaborating with famous Greek artists such as Mikis Theodorakis, Vasilis Lekkas and Haris Alexiou. In 1999 he released the album Street Secrets, featuring several instrumental pieces where Spathas displays his virtuosity and compositional skills, as well as the excellent piece Half the Way with vocals by Haris Alexiou.

Spathas’s legacy as guitarist, arranger and composer remains varied and significant; his virtuoso guitar skills, iconic compositions such as Mountains and Starvation, as well as his overall contribution to modern Greek popular music are all facets of his immense talent and generous spirit.

Yiannis Spathas may not be with us, but there is little doubt his music and spirit will live on. The following words by Rainer Maria Rilke (written about the death of Socrates) may also serve as a fitting eulogy for the great musician:

His soul was thirsty for music. And with such premonition he put his lips, dry from the wind of words, on the cup of sounds. And perhaps the strength with which he faced death did not come from his past life and work,  but from that new anticipation; he thus marched towards death as if a new day was about to dawn with the feeling that would be the day of music.