Following the premiere of lament-inspired EARTH MINUS by organist Ourania Gassiou at Westminster Abbey about a year ago, the music of London-based composer Dimitrios Skyllas was performed last month in no less than three unique locations across the English capital. Let us follow the 29-year-old composer from Volos in his London marathon throughout its various stages.

On Sunday 18 September in Royal Αlbert Hall’s Elgar Room, acclaimed Greek pianist Konstantinos Destounis gave the English premiere of Nine Miniatures for the Universe, a piece by Skyllas inspired by the planets of our solar system, the NASA Voyager recordings, as well as traditional Greek rhythms and elements.

The event marked the beginning of the collaboration between the two Greek artists. As noted by the composer: “Konstantinos and I worked together on how to deliver my piece and his exceptional technique adds a different quality to my music. It was indeed a unique experience and seeing your piece in the programme of the Royal Albert Hall is fascinating!”

Half-way there: Victoria and Albert Museum

Five days later, Skyllas presented the world premiere of his piece ABYSS for solo piano at the renowned V&A Museum. A collaboration with artist and former V&A ceramics resident Matt Smith, ABYSS is an aural composition in dialogue with Smith’s Spode: A thirty one note love song, a ‘soundscape’ that was created by reassembling old plaster moulds into new forms. 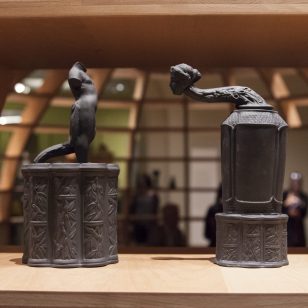 The performance took place inside the Globe, a curved architectural sculpture designed by the Havana-based artist collective Los Carpinteros. 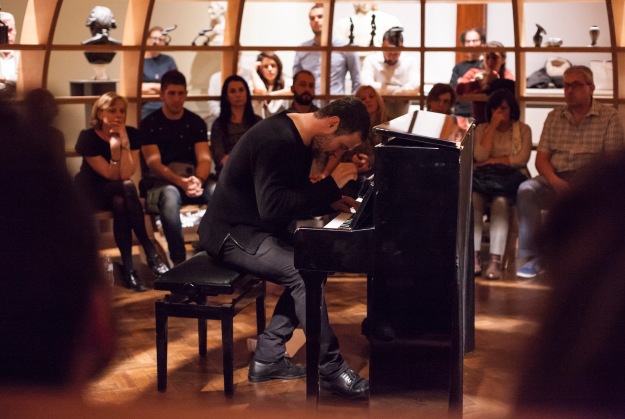 As Skyllas remarked about the performance: “Ι always desired to compose music for a museum or a gallery. The V&A is a fantastic and absolutely inspiring environment to perform. I was hugely excited by the fact that my composition and my sound would embrace these walls. My experience with the ceramicist Matt Smith was the key point to this feeling!”

Last stop in Skyllas’s London marathon was the piano recital organised by ark4art in collaboration with the Hellenic Centre on 29 September, where the composer performed some of his own works alongside and in relation to the music of Giorgos Koumendakis and John Cage, exploring the contrasts and similarities between them. 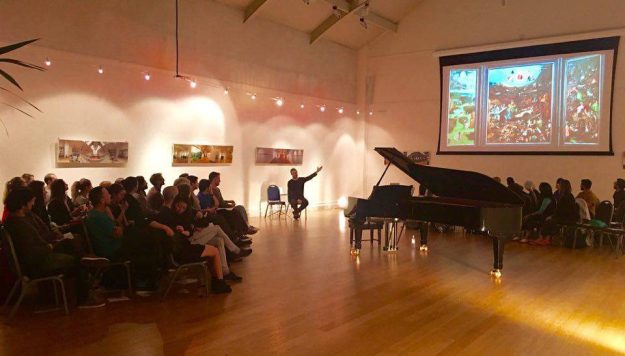 Dimitrios Skyllas at the Hellenic Centre in London

As he put it: “It was one of the most intimate concerts I have ever experienced. Perhaps it was the atmosphere, or the fact that I was playing the music by two composers I really admire, John Cage and Giorgos Koumendakis. Koumendakis’s personality and friendship have been a great influence to the nature of my work, and playing his music I felt warmth and kindness in my heart.”

It appears that collaborating with artists from various disciplines and exploring different kinds of performances and new venues has affected the way Skyllas creates music. In his own words:

“In the last two years I have received great generosity towards my work. I have collaborated with great musicians, choreographers and dancers, visual artists, writers and actors. So I ask myself, how is it possible for this experience not to influence my creative decisions? My music is defined by the circumstances as well as the environment it is being performed every time.”

As new experiences continue to expand and shape his creative vision, it becomes clear that the Greek composer’s recent London marathon has only been a small part of a much longer and challenging, yet vastly rewarding, journey: that of ongoing self-development and creative expression through composing, performing, and sharing his music with all of us.