Mid-1970s, Greece. Following the fall of the military junta, amid difficult circumstances that were however marked by widespread creativity and -hitherto suppressed- artistic activity, a rock band was beginning to take shape through lengthy jams inside improvised music studios somewhere in the western suburbs of Athens. Its name? The 4 Levels of Existence. 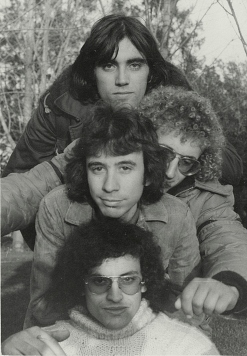 The band’s initial line-up consisted of ex-Frog’s Eye members Athanasios Alatas (rhythm guitar) and Christos Vlachakis (drums), together with Marinos Yamalakis (bass – vocals) and Nikos Dounavis (lead guitar). The group started rehearsing and making live appearances  (mostly in local cinemas as was customary for Greek bands at the time), eventually managing to win third place in a music contest organized by the National Radio and Television Foundation (EIRT) in 1975.

After having Dounavis replaced by Nikos Grapsas (lead guitar – vocals), the band was asked to make an album for Venus Records, a small record label specialized -oddly enough- in Greek folk and popular music. It was, nevertheless, a unique opportunity and the band didn’t miss it: On 5 and 6 January 1976 at the legendary Columbia Studios in Athens, their first -and only- album was recorded. Within just 10 (!) hours in total, the recording was ready after two short sessions: first all instrumental tracks were laid, then the vocals were added.

Although born under such tight time constraints and adverse circumstances (there was essentially no producer or sound engineer), the band’s self-tiled debut album was nevertheless an extraordinary achievement : A guitar-based blend of psychedelia, folk and hard rock that also featured Greek lyrics – something unusual for a rock band at the time.

A highly original mix of diverse elements, the record manages to convey a considerably wide spectrum, both musically and emotionally – from teenage aggression and heavy guitar riffs (“Metamorphic”) to controlled emotional outbursts (“The Fool’s Trumpet”) and melodic passages that exude a nostalgic feeling of youthful melancholy and lyricism (“Untitled”, “Disappointment”).

Shortly after the album’s release, the band was dissolved. However, their sole recording would follow its own incredible course, becoming a highly sought-after item among record collectors and considered one of the rarest Greek rock discs ever. Moreover, in an amazing turn of events, US rappers Kanye West and Jay-Z used Alata’s guitar riff from “Someday in Athens” as a sample for their hit song “Run this Town”, which would be sung by Rihanna and win two Grammy Awards in 2010.

Following subsequent releases in both vinyl and CD format, the 4 Levels of Existence album was recently re-released in beautiful 180gr vinyl by Anazitisi Records, a small independent label that specializes in psychedelic/progressive/blues/jazz/rock records from the 1960s and 1970s.

Just as the band’s music resurfaces once more, becoming available for a new generation of listeners, the story behind the 4 Levels of Existence has been just made into a film documentary. Directed by Iliana Danezi, the film will be having its première next week at the 21st Thessaloniki Documentary Festival.

While offering an overview of the band’s history, the film traces the surviving band members (Alatas, Vlachakis and Grapsas) and depicts them in their current whereabouts, painting their individual portraits and highlighting the development of their distinct personalities. What is more, the three musicians are seen together again some -special- day in Athens, chatting, strolling around old hangouts, and jamming for the first time in a very long time…

The band’s surviving members in 2018, during the shooting of the documentary (left to right: Nikos Grapsas, Athanasios Alatas, Christos Vlachakis)

In the end, the band’s story can also be seen as a reflection on changing times and the things that matter most as time flies by: the common aspirations and dreams of youth, the power of friendship, the sense of group solidarity and identity, the fulfillment brought by artistic expression, the feeling that not everything has been futile or wasted…

In the words of the band’s guitarist Athanasios Alatas: “[Our] record is dedicated to all the bands that played in West Attica at the time. All those who didn’t get a chance to record, who broke up, etc. All those who did their best back then, to fulfill their life and dreams through music.”

A few years ago in Tokyo, following an intensive all-night jam, various patterns of geometric nature began to form on the back of Go Kurosawa’s eyelids. That’s what gave the young drummer the idea for a band name: Kikagaku Moyo, Japanese for “geometric patterns”.

The band recently released its fourth album Masana Temples, recorded in Lisbon and produced by jazz musician Bruno Pernadas, in a conscious effort on behalf of the group to work with someone from a different background and challenge their own perceptions and ideas about psychedelic music.

An exotic -and at times explosive- blend of krautrock, folk, and Indian music, Kikagaku Moyo’s largely Improvisational music is an attempt to liberate both mind and body and create a “bridge between the supernatural and the present”.

In their highly energetic live performance in Athens (which took place just a few weeks after another excellent concert by fellow Tokyo post-rockers MONO), the band brought successfully together all these diverse elements, rewarding their Greek fans through creating their very own kind of peculiar psychedelic geometry.

A pivotal figure at the intersection of Greek cinema and music, Costas Ferris is mostly known as the director of the award-winning film Rembetiko, and -to a lesser extent- for having penned the lyrics for Aphrodite’s Child’s psychedelic masterpiece 666.

Probably less known has been the collaboration between Ferris and musician Stavros Logaridis, member of the famous Greek pop group Poll and founder of the progressive rock ensemble Akritas, whose debut (and sole) self-titled album still ranks as one of the very peaks of its genre.

Described as a “dance suite for quartet and play back”, Akritas (1973) features a highly original blend of rock, electronic, classical as well as folk elements. Ferris, who had first met Logaridis in London in late 1972, wrote the lyrics for this truly outstanding album, which (like Aphrodite’s Child 666) contains biblical references and allusions to the Book of Revelation in particular.

The two men would soon collaborate again for Ferris’s film The Murderess (1974), based on a well-known Greek novel by Alexandros Papadiamantis. A visually stunning and innovative film, The Murderess also stands out for its unique soundtrack, consisting solely of instrumental electronic music. Composed by Logaridis, who was only 21 years old at the time, the music is largely experimental and abstract, yet closely following the film’s narrative and complementing the various themes and motifs so effectively it soon becomes itself one of the movie’s major components.

Ferris and Logaridis would form a close friendship and collaborate again on various occasions, including the music for the TV series Violet City in 1975 (which would actually lead to a legal battle against Vangelis concerning the famous theme from his Oscar-winning score for Chariots of Fire).

Although Logaridis never quite achieved the level of fame or international success of artists like Vangelis or Aphrodite’s Child, his singular talent remains indisputable. Not unlike Ferris’s seminal role in the evolution of modern Greek cinema, Logaridis’s work has been crucial -if somewhat understated- for the development of the Greek music scene in the 1970s and 1980s.

Indeed, as testified by such groundbreaking works as The Murderess and Akritas, the collaboration between the two Greek artists bore some very special fruit, both on screen and on record.

In a beautiful green setting just a couple of hours away from the hustle and bustle of Athens, a unique get together of different people, sounds, and musical styles took place around mid-August in the 4th edition of the Arvanitsa Music Forest Festival.

Nestled inside a lush landscape, the stage was surrounded by tall green firs, its powerful projectors and strong lights bringing forth a symbolism that run throughout the festival: the convergence of old and new, traditional and modern, urban and rural.

The music of uprooting

Intensified and increasingly relevant due to the ongoing socio-economic crisis in Greece, the theme of emigration and resettling was recurrent in the performances of several artists who treated it both as a vehicle for artistic expression and socio-political commentary.

A case in point is Hamayun and Wakar by Greek songwriter Thanassis Papakonstantinou. The song relates the tragic story of Hamayun Anwar and Wakar Ahmed, two young men from Pakistan who lost their lives in 2012 while trying to save an elderly Greek couple that was trapped on rail tracks.

Another highlight included the electrifying renditions of popular folk tunes by Villagers of Ioannina City (aka VIC), a Greek band that brings together folk influences with post, stoner and psychedelic rock elements. Songs such as Jiannim or Chalasia combine skilfully the traditional form and emotional undertones of Greek folk song with a contemporary sound and orchestration, thus reaching out to audiences that would otherwise have little or no interest in folk music.

This happens when city folks gather in the forest to play, listen and sing to the the new old sound of Greek folk rock music.

Here is wisdom. Let him who has understanding calculate the number of the beast, for it is the number of a man: His number is 666.

Although 60s-70s Greek rock music was of no particular interest to the international public (not least because of obvious linguistic reasons), there were however some notable exceptions. Perhaps the most well-known Greek English-singing band of the era is Aphrodite’s Child (named after a song by Dick Campbell), formed in 1967 by Vangelis Papathanassiou (keyboards), Demis Roussos (bass guitar and vocals), Loukas Sideras (drums and vocals), and Anargyros “Silver” Koulouris (guitar).

Their first single Rain and Tears (1968), an adaptation of Pachelbel’s famous Canon in D, was recorded while the band was based in France. It met with considerable international success and went on to sell more than one million copies.

The band’s undisputed masterpiece, however, would be 666 (The Apocalypse of John, 13/18). Recorded between late 1970 and early 1971, 666 is considered a landmark in the history of progressive rock. An album of astonishing musical diversity, it was a powerful combination of original concept and highly innovative sound.

666 was largely Vangelis’s own musical project, as is testified by the advanced (for the time) use of synthesizers/keyboards, sound effects, and overall production. Musically, the album contains several remarkable moments (e.g. Aegean Sea, Break, The Four Horsemen), however it works best when seen as an uninterrupted, thematically-unified musical composition.

Its musical merits notwithstanding, the release of 666 was not unproblematic. The record company did not approve of the record’s length and largely experimental style, to say nothing about its subject matter. To top it off, the track “∞” featured Greek actress Irene Papas singing frantically “I was, I am, I am to come” in an aural simulation of female orgasm.

When the double album was eventually released in 1972 (one year after it had been completed), its blood-red cover (where the number 666 is prominently displayed) would also stir some controversy. This, however, only helped to boost the album’s sales, which exceeded 20 million copies worldwide.

Despite being the band’s greatest achievement, 666 would also be their swan song. Relationships between band members grew increasingly worse during the album’s recording, and by the time the record was out Aphrodite’s Child had already split. Both Roussos and Vangelis would follow successful solo careers, the latter achieving worldwide fame as a composer of electronic music (including the soundtracks for Blade Runner and Chariots of Fire).

Even though the children of Aphrodite had chosen to go their separate ways, they had managed to give birth (albeit a troubled one) to their psychedelic masterpiece – an everlasting monument of Greek rock music and one of the defining albums of the 70s progressive and experimental scenes.