Although I grew up in a house with a fair number of vinyl records lying around, I belong to the compact disc generation. The first music album I ever bought was in CD format, and so were the countless others that followed over the years. That is, until fairly recently, when I finally got around to buying my own record player.

I only started getting seriously involved with vinyl around 2008, after already having moved to rainy Amsterdam from my sunny hometown, Athens. It was not the change of climate, however, that did the trick. It was the city’s amazing vinyl market and the enchanting, vintage black discs with the cool artwork that kept catching my eye even though going back to vinyl in our digital age seemed to be a clearly retrogressive move, like reverting to agriculture from industrialization (which actually doesn’t sound that bad I have to confess).

Getting to know Amsterdam’s record stores has been an ongoing adventure, and a most pleasurable one. I’m mostly talking about independent record stores, with their special charm and character, like the fictional Championship Vinyl in Nick Hornby’s High Fidelity. 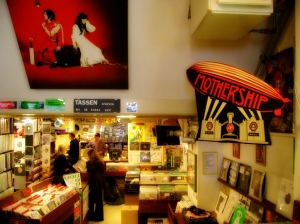 Inside ‘Concerto’, one of Amsterdam’s oldest record stores

Fortunately, such stores are still amongst us, and record hunting around there as well as the city’s flea markets has been a favorite pastime ever since I got my record player (if you want to know more about the unique world of Amsterdam’s record stores, check out my survey about the top vinyl spots in town).

The unique culture of indie record stores is celebrated through Record Store Day. Originally conceived in 2007, it is now celebrated the third Saturday every April (it was officially kicked off by Metallica at Rasputin Music in San Francisco on April 19, 2008).

On Record Store Day (April 20 this year) the participating independently-owned record stores organize various events and festivities, while special vinyl/CD releases and live performances from hundreds of artists also take place (you can check here to see if there is a participating store near you).

In the words of Sir Paul McCartney: “There’s nothing as glamorous to me as a record store. When I recently played Amoeba in LA, I realized what fantastic memories such a collection of music brings back when you see it all in one place. I hope that these kinds of stores will be there for us all for many years to come.”

“As everyone knows, Al Green Explores your Mind is as serious as life gets.”

In case you are already familiar with Nick Hornby’s work, High Fidelity (published in 1995) needs no further introduction. A brilliantly entertaining and yet remarkably insightful take on life, relationships and pop music, it remains a classic of its genre. In 2000 it was also made into a film starring John Cusack as the audiophile Rob Gordon. Rob (whose last name in the book is actually Fleming) is the novel’s main character and a music geek who takes pleasure in coming up with top 5 lists of ex-girlfriends, records, films, artists and pretty much everything else.

A big plus to Hornby’s novel are the many musical tips scattered across the text. A whole playlist full of soulful and funky tunes that can still be enjoyed long after the reading is over, and which also served as a basis for the film’s groovy soundtrack.

So here are my all-time, top five most memorable musical references in High Fidelity in chronological order:

1) Solomon Burke – Got To Get You Off My Mind

3) Smokey Robinson and the Miracles – It’s a Good Feeling

Followed by my top five, most memorable quotes from Hornby’s book in order of appearance:

1) “What came first, the music or the misery? Did I listen to music because I was miserable? Or was I miserable because I listened to music? Do all those records turn you into a melancholy person?”

2) “I reorganize my record collection; I often do this at periods of emotional stress. When I’ve finished I’m flushed with s sense of self, because this, after all, is who I am.”

3) “To me, making a tape is like writing a letter – there’s a lot of erasing and rethinking and starting again. A good compilation tape, like breaking up, is hard to do.”

4) “You know the worst thing about being rejected? The lack of control. If I could only control the when and how of being dumped by somebody, then it wouldn’t seem as bad. But then, of course, it wouldn’t be rejection, would it? It would be by mutual consent. It would be musical differences. It would be leaving to pursue a solo career.”

5) “How can you like Art Garfunkel and Solomon Burke? It’s like saying you support the Israelis and the Palestinians.”