I first got to know The Cinematic Orchestra through their album Man with a Movie Camera, which served as a soundtrack to a re-released version of the experimental 1929 silent documentary film of the same name by Soviet director Dziga Vertov.

Although they have been around since 1999, The Cinematic Orchestra have only released 3 studio albums (Motion – 1999, Every Day – 2002, Ma Fleur – 2007) next to other projects such as remixes, soundtracks, or live recordings.

I had the chance to watch the British nu-jazz/electronic band perform live in Barcelona’s Apolo venue, and it was quite an experience. Although their studio recordings are perfectly capable of creating a unique atmsophere and setting the mood, watching them on stage felt different and somewhat special. 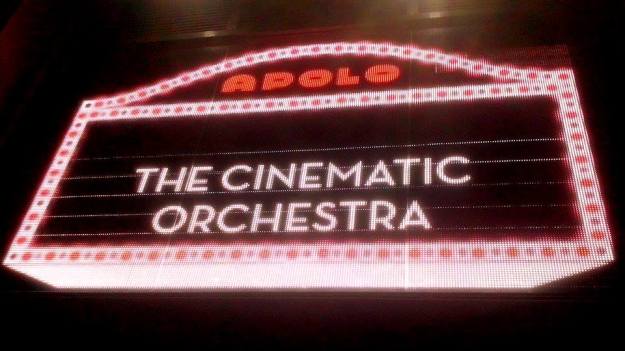 Led by founder Jason Swinscoe, the band was joined by a number of highly skilled instrumentalists including violinist Miguel Atwood-Ferguson, saxophonist Tom Chant, drummer Luke Flowers, as well as vocalists Heidi Vogel and Larry Brown who added an ethereal tone to the performance. Next to more well-known and classic numbers, the setlist also included some pretty impressive new material (such as J Bird), which left me looking forward to their next album release.

The band’s way of combining live jazz improvisation with electronica was a pleasure to watch, and though the show could have been longer, it was nevertheless an excellent performance from a group of truly remarkable musicians.

[As a side note, since this was my first time at Apolo: at times the hall resembled a classroom where the kids had to be shushed by the teacher -in this case the artist- in order to make silence. Not sure yet if this is typical Barcelonan audience behavior, but I suspect so!]